Smoking during pregnancy: Get your facts straight!

Well, let’s not beat around the bush: smoking, be it tobacco or pot, is extremely toxic for you and your developing baby. Cigarette smoke contains over 1000 different chemicals but carbon monoxide and nicotine are suspected to harm the foetus the most. Your choice to share these chemicals with your child may be condemning her/him for a lifetime. Keep in mind, your baby is exposed to similar risks if anyone else smokes near you (second-hand smoking).

What’s so harmful about smoking during pregnancy?

Every single puff you take during pregnancy fills your womb with toxins that go straight to your baby. According to studies, foetal deaths and still-births are more prevalent among women who smoke while pregnant.

Carbon monoxide replaces oxygen in your blood: this not only restricts your baby’s oxygen supply and stresses the baby’s tiny heart (which may cause heart defects) but the poisonous gas also damages your baby’s lungs which may result in under-developed airways. This increases the likelihood that your child will be vulnerable to respiratory diseases like asthma and lung infections later in life.

Nicotine reduces uterine and placental blood flow: this can cause miscarriages.
A reduced blood supply means fewer nutrients and less oxygen available to your baby, thereby affecting foetal growth and development. Hence, your risks of delivering a low-birth weight and/or a premature baby, who will be more prone to diseases, are heightened.

Foetal malnutrition and toxicity have also been linked to onset of cancer, diabetes and obesity in adult years. Moreover, inadequate nutrients and oxygen supply in the womb has been associated with a wide variety of cognitive, achievement and behavioural disabilities such as attention deficit hyperactivity disorder (ADHD). Your baby is also at risk of intellectual impairment, mental retardation and congenital malformations.

Sudden Infant Death Syndrome (SIDS): Your newborn is two to three times more likely to die from SIDS if you smoke when pregnant, or if you relapse after delivery, or even if you were exposed to second-hand smoke during and after conception. 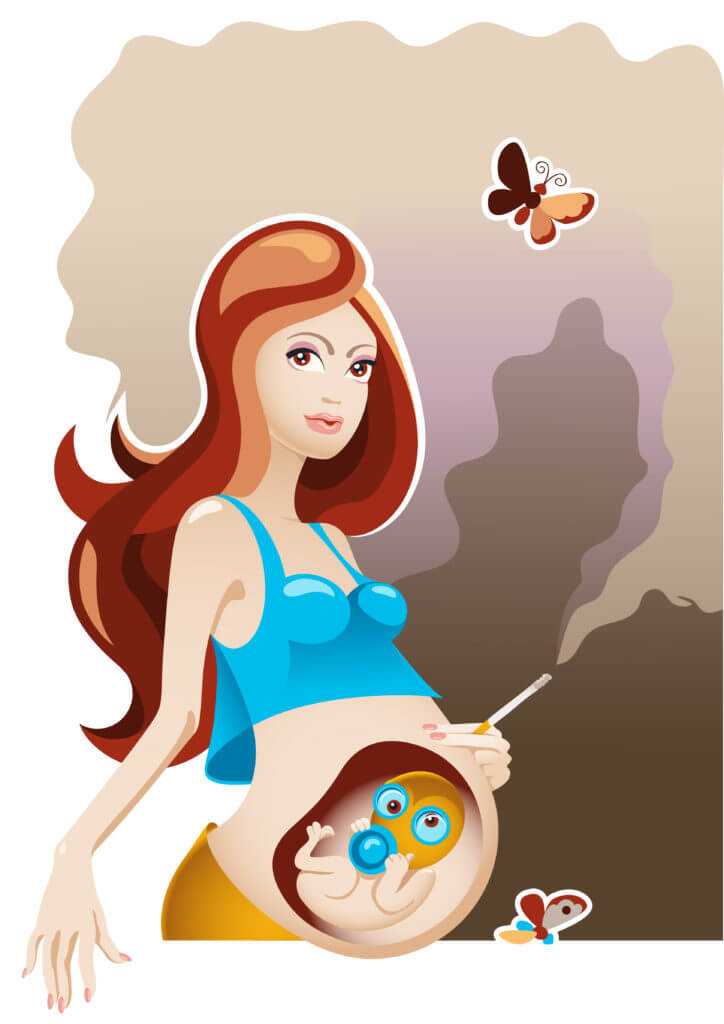 Smoking during pregnancy = Putting your own life in jeopardy.

Premature detachment of the implanted placenta, premature rupture of membranes, vaginal bleeding, low-lying placenta, ectopic pregnancy (instead of attaching to the uterus’ walls, the embryo gets implanted somewhere else, in the tubes for instance)… These are a few of the most serious complications of pregnancy that have been linked to smoking.

Butt out for baby!

Give your child the best start in life. Whether you’re planning to conceive or you already have a bundle of joy on the way, now is the best time for you and/or your partner to kick this bad habit. Starting a family does not come cheap; why not spend your hard-earned money on your loved ones instead of burning it?

Habits are hard to break. To make it easier, talk to your doctor and closed ones; ask for their support. Don’t do it on your own. Why not rely on others when there’s a little one relying on you?

Here’s a link to the NHS support website for those who want to stop smoking: http://smokefree.nhs.uk/