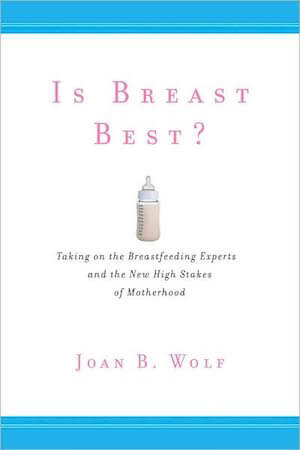 Is Breast Best? Taking on the Breastfeeding Experts and the New High Stakes of Motherhood review

By Joan B Wolf

The title of this book is the question that the medical establishment thinks that it has already answered with a resounding “yes”. If you visit any antenatal clinic in the United Kingdom, you will certainly encounter propaganda (there is no other word for it), including leaflets and posters encouraging women to breastfeed their children instead of using formula milk.

But is the propaganda right, taking everything in the mother and baby’s life into account?

Joan Wolf is an academic, and looks at this subject from an academic’s point of view.

Given that Wolf is an Associate Professor of Women’s Studies, you will not be surprised to see that the book has a learned tone. It is not chatty in the same way that many parental advice books aim to be light-hearted companions to pregnancy. But this does not make “Is Breast Best?” a heavy or difficult read – Wolf is witty and warm in her writing.

In her book, Wolf examines the research that has led the establishment to conclude that breastfeeding is best for babies, and questions the assumptions that support that conclusion. We are now so risk averse, Wolf claims, that even if the “edge” breastfeeding has over bottle feeding is miniscule, we will still disrupt work and personal decisions to accommodate it.

One of the most powerful messages Wolf makes in this book is the shift in attitudes from the “good enough” approach to parenting of the 1960s-1980s to the “total motherhood” of today, where women are pressured to believe that they “can and should produce perfect children.” This paradigm shift seeks to control women and their bodies, and keep women “in their place.”

It is important to note that this book is not at all anti-breastfeeding. Wolf would be the first to admit that there are some advantages to breast milk over synthetic substitutes. What she aims to examine, as she works her way through her book, is what that margin of difference between the two feeding methods is.

Wolf comments that as a society, the United States (which is where she is from), is obsessed with risks, and trying to take control of them. So even though the “risks” from bottle feeding are tiny, they are still pounced on by a risk obsessed public.

One of the most interesting points about this debate is that it is about far more than breastfeeding. Women in the United Kingdom are typically entitled to a year’s maternity leave – of which at least six months is paid at least at the statutory maternity rate. But American women are typically only entitled to a few weeks’ after the birth of their children, and even if they are lucky enough to get that, the leave is unlikely to be paid. Whilst it is possible to continue breastfeeding after you return to work, it is far more difficult than it is for a stay at home mother. And when breastfeeding advisers typically recommend that women breastfeed their babies for at least six months, in these circumstances the debate mushrooms into whether women should be going back at all.

This book is a brilliant read if you have an open mind and are interested in the scientific establishment’s attitude to women’s bodies. It is essentially a feminist text which happens to be about breastfeeding, which is why it could appeal to anyone – male or female.