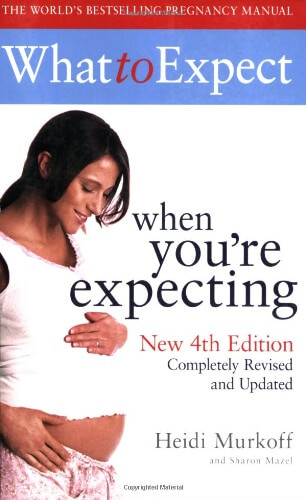 What to expect when you’re expecting review

Everyone has heard of this book, whether it is because the first edition was published in the mid- eighties, or because the writer has expanded it into a film starring Cameron Diaz. The “what to expect” brand is marketed as a tried and tested authority on pregnancy, and even includes a website and online community.

So what can you expect from this book? The first thing that strikes the reader is how comprehensive it is. Heidi Murkoff covers every aspect of conception, pregnancy and birth that you can think of, and a great many things that might never have occurred to you!

The layout is straightforward: seven parts containing twenty-three chapters. Murkoff herself has had two children and has called on a number of friends and medical experts to ensure that the advice she gives in this book is as accurate as it is up to date.

The style is authoritative but not bossy; chatty but not vague.

Pregnancy itself is dealt with in two ways. Firstly, part one deals with the lifestyle issues like what you should and should not be eating, how your exercise regime should change and how you might feel about growing a baby. Part two gets into the nitty gritty of what is happening to your body and to your growing child month by month.

In addition to the biological stuff, there is also some really useful advice about the less serious stuff pregnant women encounter, such as how to deal with the torrent of unwanted advice you are likely to receive, and how to discourage people politely from touching your bump!

Sometimes books like this can seem rather dry, being a relentless onslaught of information. However, Murkoff’s book does not fall into this trap. By keeping the sections short and sweet, the book is easy to dip in and out of. She also switches seamlessly between advice in her own voice to question and answer sections where you assume the questions are asked by other readers.

Whilst this version has been formulated for a UK audience, in some places it is obvious that the author is American and has the US system in mind. For example, the section on how to choose your healthcare professionals could give readers the impression that picking and choosing the person who will help them deliver their baby is as simple as choosing a meal from a menu. On the other hand, for most women in the United Kingdom, you turn up to the birthing centre or hospital and are cared for by whoever is on the rota that day.

Murkoff does not shy away from difficult topics such as serious complications, and pregnancy loss. In some places she has written in so much detail about these subjects that the book seems almost pessimistic. However, her readers will be well informed.

In general, What to Expect is an easy to read work about everything a pregnant women would want to know. What more can you ask from a pregnancy book than that?