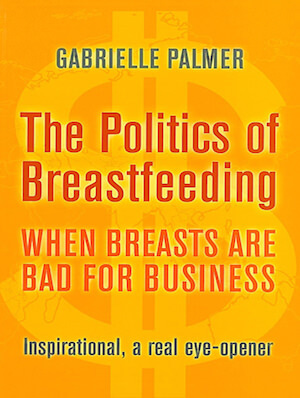 The Politics of Breastfeeding review

Why doesn’t every mother breastfeed her baby? Breast milk is free, available on demand and has numerous health benefits. For very few women, breastfeeding will be physiologically impossible. However, the majority of those who formula feed do so because that is their choice.

In her book, Gabrielle Palmer questions exactly who has made this decision for mothers, and why. She compares and contrasts the breast and bottle feeding statistics in Western societies with civilisations where people live more in tune with nature.

It is only in the West, Palmer claims, that women’s breasts have been sexualised and objectified to such an extent that some men pay to see them. However, in the same society, a breastfeeding woman who does not even expose her nipple when suckling her child will evoke disgust.

Palmer explores a number of other feminist ideas about the way in which men have controlled women’s bodies and choices and how breasts are now seen in the West as cosmetic appendages, rather than tools for feeding babies. She puts forward the idea that as birth and children’s health have been medicalised, there has also been a shift from the knowledge that mothers passed on to their daughters to a system where male medical professionals interfere unnecessarily.

Palmer cites many ways in which breastfeeding is becoming a lost art. One of the recurrent themes throughout the book is her sadness that women are choosing to formula feed not because they are lazy or feel disgusted by breastfeeding, but because they have been brainwashed by medical and commercial institutions into feeling that is the best thing to do.

Millions of women are told that they do not have enough milk, when really they need help from people with the time, patience and perhaps most importantly of all, the personal experience, of breastfeeding their own children. Palmer has the very real fear that knowledge about breastfeeding is being lost through the generations.

The most powerful message that Palmer has to impart in this book, however, is neither social nor political, but economic. The simple and rather chilling truth is that formula feeding is widespread in the developed and developing world because it is profitable for formula feed manufacturers. The health of the babies and mothers involved, Palmer claims, is irrelevant to them. Formula is being pushed (in the same way that drugs are pushed) on developing societies and sold as a progression towards a new scientific era, where the “problem” of how to feed babies has been solved by formula companies.

When you respond to a charitable appeal for aid for a third world crisis, you may not think about exactly what will happen to the money that you donate. However, Palmer cites numerous occasions when charitable donations have been spent on unnecessary formula.

The writer’s evidence is in most parts unarguable. So why is this not an international scandal? This is perhaps the only criticism you could levy against this book. A tome entitled “The Politics of Breastfeeding” is unlikely to be read by many men, and even less likely to be read by men or women who have not had or are not planning any children. A different title might have attracted more readers and catapulted this topic into the limelight, where it deserves to be.