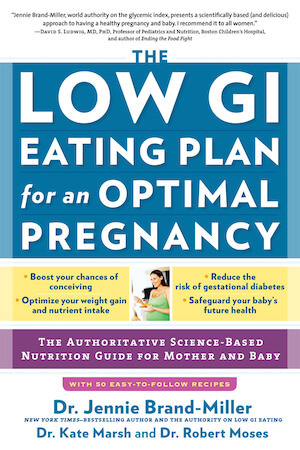 The Low GI Eating Plan for an Optimal Pregnancy review

Its title may not be catchy, but the name of this book fits its content nicely. The guide is straightforward, practical and gives you exactly the information you need.

There have been numerous diet “fads” that have caught the world’s attention. From believing that eating fat was bad, the pendulum swung the other way and the world embraced the Atkins diet, where carbs were exiled; and the Dukan diet, where protein was king. Now regimes that feature a period of fasting each week are highly popular.

Low GI diets, on the other hand, have constantly been on the radar for a couple of decades and have never really fallen from fashion. The writers of this particular book have very impressive pedigrees, and have researched, lectured and practised low GI diets with people at all stages of their lives – not just pregnant women.

The theory behind low GI diets is that foods with a low glycemic index which help you keep a steady blood sugar level. It follows that during pregnancy, when your hormones and blood sugar levels are disturbed greatly, introducing low GI foods into your diet makes sense.

Doctors Miller, Marsha and Moses start the text by explaining to the reader why it is so important to be a healthy weight when you are trying to conceive, and throughout your pregnancy. Obesity and bad eating habits, they claim, leave a genetic imprint on our children, and hand down a tendency to obesity through the generations.

The writers walk a fine line between stressing that the die has already been cast by a woman’s eating habits, to claiming that it is never too late to make a difference. The tone of the book is positive and helpful rather than accusatory.

The writers not only set out why you should eat low GI foods, but also give you practical ideas about what you should be eating. The first three sections of the book talk about the theories of good diet during the time when you are trying to conceive, and the last section gives information about which foods you should be eating, and various recipe ideas.

However, if there was one criticism of this book, it would have to be that it does not provide a plan in the same way that a regular diet book would. The recipes at the back of the book are clearly written and do not contain expensive ingredients, but they would only provide a two week meal guide.

On the other hand, there is more than enough information about the kinds of foods the reader should be choosing to enable you to plan foods for the rest of your pregnancy or modify the meal suggestions.

Of course, when your baby has arrived, eating a healthy diet becomes even more important. There is plenty of information about diet during lactation, and what a woman’s body needs when she is recovering from the birth. A new dimension the writers add, which is fairly unique to pregnancy diet books, is their emphasis on the fact that the mother has an extra duty to eat well as a role model for her new child.