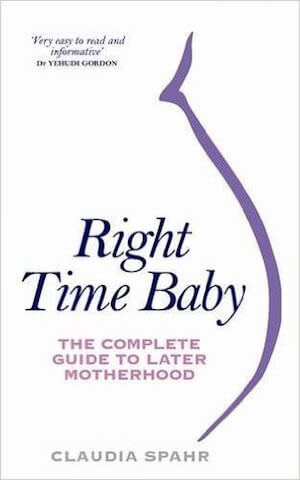 How old is “too old” to have a baby? Women are bombarded with messages in the media that after the age of 35, time is running out. However, in this book Spahr gives lots of tips and practical advice that helps would-be older mothers boost their fertility and maintain a healthy pregnancy.

Spahr does not dispute the fact that getting pregnant when you are over 35 might be harder than it would have been in your twenties. That is simply a biological fact, and changes in society have not brought about changes in biology. Just because women have become accustomed to building a career and establishing their own financial independence before they turn their attention to starting a family, this does not mean that your thirties are as fertile as your twenties.

However, Spahr is quick to point out the many advantages that having a baby later in life can bring. It is far better, she claims, to take your time and make sure that your partner is the best father you can find for your future offspring, than to settle for the first man you meet in your twenties. Likewise, older women may give birth to healthier children, because they are statistically more likely to educate themselves on health issues and stick to medical advice.

After a general discussion about when the “right time” to have a baby might be, Spahr speaks about how a couple can get themselves into the best shape possible for conceiving a child. She focuses on diet and stress, but she also talks about general fertility awareness.

A big theme of the book is the importance of concentrating on your cycle and learning as much as you can about your own body. The text contains more discussion about IVF and assisted conception methods than you might otherwise expect in a pregnancy book. However, this may be because older women are more likely to be “sold” the myth that they will need treatment because of their age.

Whilst she is not anti IVF, Spahr is keen for her readers to approach treatment with their eyes open and appreciate that the business of fertility is a lucrative one for clinics and drugs manufacturers alike. Her key message is that conception is a natural process, and if a couple is having problems then natural solutions (including diet improvements and stress reduction) should be pursued first.

Given that Spahr is a journalist, it is no surprise that the book is easy to read. There are numerous quotes from various specialists and better known pregnancy guides. However, as she admits in her preface, she only carried out 50 interviews with women face to face to write this book, and obtained 60 further questionnaires, which does not really compare with the decades of medical experience that the better known pregnancy guides are typically based on.

Further, there is a sense throughout the book that the medical profession is unfairly picking on women who are trying to get pregnant over 35, which seems unfair when the evidence is clear that conception is harder at that age.

Spahr is, on the other hand, realistic about the challenges that her readers may face. She deals with miscarriage particularly sensitively, and talks about the increased risks of pregnancy in older women sensibly.

In conclusion, this book is well worth a read whatever your age, because it has a different perspective from many other pregnancy books on the market.