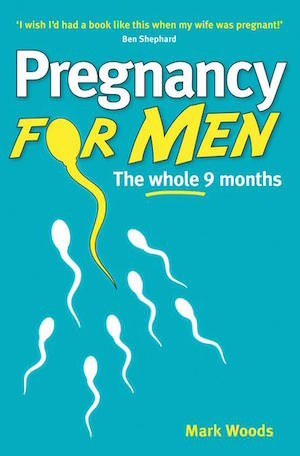 Rather than making do with a single chapter for fathers added as an afterthought to a regular pregnancy text, dads have this book all to themselves. Mark Woods has written a book that seeks to set out all of the information that fathers-to-be want to know about conception, pregnancy and birth.

The structure of the book is familiar in this genre – the writer takes his readers month by month through the development of the baby and the changes that are taking place in their partner’s body. It must have been difficult to know where to pitch this book, but it does not skimp on detail (biological or otherwise). It is refreshing to see a discussion of women’s bodies written for men that is neither squeamish, nor sexual.

The book also deals with the changes that happen month by month to the baby itself, and provide the reader with a “progress report” on the child’s development.

One of the things that sets this book apart from its competition is that it is full of practical things that a man can do to plan for his baby’s arrival. There is plenty of information about equipment for the nursery that men can buy, with a particular focus on buggies, which men are presumably meant to be interested in!

Aside from purchasing nursery equipment and furniture, there are plenty of suggestions about how a man can give his pregnant partner practical help. Woods gives his readers ideas for support like taking on the lion’s share of the housework, but he also deals with much more heavyweight advice such as encouraging new fathers to make a will, given their new responsibilities.

Such serious advice comes as a surprise given the otherwise blokey and light hearted tone of the rest of the book. In fact, Woods’ style is the only thing that is at times irritating. By addressing pregnancy and impending fatherhood in a jokey fashion (aside from brief periods of sensitivity when addressing miscarriages), Woods runs the risk of trivialising the subject that he obviously felt strongly enough to write about.

However, Woods more than redeems himself when he goes on to speak about the change in the nature of the relationship between mother and father in British society during the last few decades. This unexpected social commentary is excellent in that it does not present the debate as a gender war: rather he considers how the role of his reader as a father might differ from their own dad. Of course, Woods points out that today’s fathers are much more likely to be heavily involved in their children’s lives. However, they may not be sure exactly what their own role should be.

The conclusion is that fathers and mothers can and should work together as equal members of a team, and Woods gives lots of suggestions about how this could work. What could be a better approach to fatherhood?