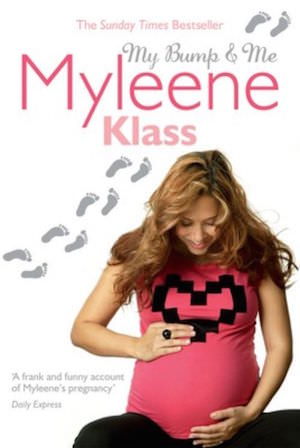 My Bump and Me review

It can be easy to dismiss books written by celebrities as a chance to earn some extra cash; a lucrative ride on the bandwagon. However, this book by Myleene Klass is different from those kinds of books, as it is a heartfelt sharing of her personal experiences.

Myleene first shot to fame as part of the manufactured pop band “hearsay”, but then established herself as a credible musician, being classically trained and a talented television presenter.

Celebrities often promise that they will open up and reveal all in such books but do not actually tell you anything. However, My Bump and Me is a refreshingly candid account of her pregnancy.

The musician and TV presenter really does begin at the beginning, confessing to her readers that her first pregnancy was in fact unplanned. It comes as a surprise to those who are familiar with her public persona that someone so clever and driven could happen upon something so important as pregnancy by accident.

The candour continues throughout the book, as Myleene’s experience of pregnancy is far from glamorous. She has sore boobs, morning sickness and hormonal fluctuations like the rest of us!

What is particularly interesting is that she worries constantly that she may not be doing the right thing. For example, given that her pregnancy was a surprise, she had been drinking some alcohol for a couple of weeks before she found out. Also, she had flown and eaten a broad range of foods before she realised that there is a “forbidden” list for pregnant women. A brief trip to the doctors put her straight that there was virtually no chance that she had harmed the baby, but readers will find it reassuring that even celebrities have similar worries.

Something that gives the book an extra dimension are the panels of diary entries from her partner, Gray. He put his point of view in a forthright manner, and gives an account of how he feels throughout the pregnancy. It is really refreshing to hear a man’s point of view on every month or so, when pregnancy books typically only have a few lines from the dad.

Myleene is so keen to dispel the myth that celebrity people have trouble free lives that she does seem to moan a lot. She can seem downright negative at times as she stresses and worries her way through the 36 weeks (her baby was slightly early). But this just shows that the account is a warts and all one.

This is not the book to choose if you want in depth medical advice. There are panels of information here and there that update the reader about what your baby would look like or feel like each week. However, these have been thrown in to gives reassurance on the general points that are thrown up during Myleene’s account of her own experiences.

At the end of this book, Myleene feels like a friend who has confided her intimate secrets of pregnancy and birth. It’s worth reading for a no holds barred account of pregnancy, and proof that celebrities are human after all!